Researchers from the ITV serial drama contacted the Trust to help them accurately portray the character’s relapse in mental health following a traumatic episode. 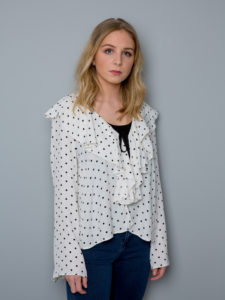 Michael said: “We started working with the team at Emmerdale in 2014 when, as a teenager, Belle first began experiencing symptoms of psychosis, following her release from prison.

“With mental health problems affecting as many as one in eight young people, and most mental health illnesses presenting before the age of 24, Emmerdale are shining a spotlight on the often unheard experiences of many young people.

“Being a prime time television programme, they have a great platform for raising awareness of serious mental illnesses like psychosis; helping to end the silence which can surround the condition and offering people experiencing symptoms hope for the future.

“We are pleased to be able to lend our continued support, to ensure the story is presented as honestly as possible and reflects the real life challenges people face as they begin their recovery journey.”

Paul added: “About two in every hundred people will be affected by a psychotic illness in their lifetime. Although symptoms usually present in later teenage years or early adulthood, they can occur at any age. These include having hallucinations, feeling paranoid or developing beliefs that seem unusual to other people. Erratic thought processes and difficulties performing functions of everyday life may also indicate there is a problem.

“Seeking early support is important. Your GP will be able sign post, or refer you to the most appropriate services for help.

“Although it can be scary to ask for help, the sooner people begin treatment the better recovery and outcomes they are likely to experience. There is a wide range of support available to help people get back on track and start living the sort of life they want to lead.”