A learning disability nurse’s passion for ensuring people can live “the life they want to live” was recognised, when he received a prestigious national award.

John Savage, head of nursing for Durham and Darlington at Tees, Esk and Wear Valleys NHS Foundation Trust (TEWV) is one of the first people in the country to receive the Chief Nursing and Chief Midwifery Officer Silver Award, for his performance, which colleagues agree goes above and beyond the expectations of his everyday role.

John started his career as a registered nurse in acute hospitals, but always had an interest in learning disability nursing.

As a result, he went back to University for further training, before becoming a staff nurse at the TEWV’s Bankfields Court learning disability facility in Middlesbrough.

As his passion for the job shone through, he then saw his career take off and he became a clinical lead in learning disabilities, before becoming a ward manager and later a head of nursing.

More recently, he has been supporting partner organisations and commissioning bodies to improve care for people with learning disabilities, in particular supporting them to stay in their own homes when possible.

John said: “Obviously I didn’t know anything about it and I was very honoured to receive it – especially in 2019, the year that we’re celebrating 100 years of disability nursing.

“I’m very proud. I’ve worked in the area of learning disabilities for the last 15 years and my partner is also a learning disability nurse. She and other members of my family who are supportive of me have been really proud.

“It is great to get that national recognition and colleagues have helped to raise my profile.”

Like so many other caring professionals, John just sees what he does as “part of my job” – but admits “it’s nice to be appreciated” after getting the national accolade.

He adds the reason he has such a passion for learning disability nursing is because it feels like he is making a real difference to people’s lives.

He said: “Being able to focus on learning disability nursing and work one on one with patients is my passion. I believe everyone should have the right to live in their own home with the right level of support and we support that process, giving people their independence to live the life that they want to live.”

Ann Marshall, deputy director of nursing at the Trust who supported John’s nomination alongside some of his colleagues, said: “John just thinks he is doing a job but he does more than that. He absolutely advocates and promotes the profession in such a positive way.

“I think this is good for the organisation as a whole and demonstrates the level of commitment we have to learning disability services.”

The Chief Nursing and Chief Midwifery Officer awards were developed to reward significant and outstanding contributions made by nurses and midwives in England and their exceptional contribution to nursing and midwifery practice.

The awards recognise the enormous range of skills, expertise, and enduring compassion that modern nursing and midwifery represent.

They celebrate nurses and midwives who go above and beyond their everyday roles to provide excellent care, leadership and inspiration to their colleagues and patients.

Ann said: “We were delighted when, at the Trust’s nursing conference, Margaret Kitching, chief nurse North East and Yorkshire, on behalf of Ruth May, chief nursing officer of England, presented John with his award.

“It is thoroughly well deserved and everyone is thrilled for him.” 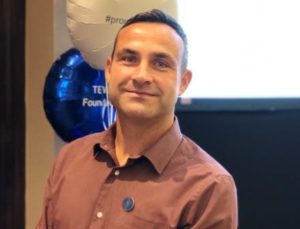